HOW TO BACKPACKING IN HUE CITY?

Whatever you do though, don’t skip Hue if you’re traveling through Vietnam!

Hue is one of the most charming towns in Vietnam. Located right in the middle of Vietnam, Hue was the capital for 143 years (1802 – 1945). This city is about 1000 kilometers from Ho Chi Minh City and 700 kilometers from Hanoi, travelers can easily take a train a fly to this beautiful city. And for those who do not know, this place pronounced “hway”.

This was a city built just for the Emperor and his entourage. Owing to its rich historical past, this region is home to 7 imperial tombs as well as the ancient imperial city, so it is utterly attractive and has a lot to offers.

Add to the historical significance of the city, the beautiful landscape, and breathtaking monuments. It seems like there is something new in Hue to explore!

Many travelers require a visa to travel to Vietnam, or at very least a pre-paid E-Visa. Make sure that you check your visa requirements before you travel.

THE BEST TIME TO VISIT HUE

Each season in Hue has its own beauty and interesting experiences, however, Autumn is still the season chosen by backpackers more because this season has the characteristic romance of Hue. From self-sufficient Hue backpacking experiences, the best time for backpacking is from November to April.

WHERE TO VISIT IN HUE

The Imperial City is Hue’s main attraction. But the sheer number of historical sights here can make it really hard for backpackers to decide which places to visit. Here are some brief information about these place.

This place has been listed as a World Cultural Heritage Site since December 1993. Build on the northern bank of the Perfume River, the construction of Hue Imperial Citadel completed in 1832.

Recommend: Backpackers can can buy a package tickets that includes access to the Imperial City, the Royal Antiquities Museum and the royal tombs of Khai Dinh, Minh Mang and Tu Duc. These tickets are available at Ngon Mon Gate.

Since Hue was an imperial capital for well over a century, many of the former Emperors have elaborate tombs dedicated to them here. Most are located along the Perfume River south of Hue (meaning most survived the war), and you can make a full day of it if tombs are your thing.

Popular tombs to see in Hue include the tombs of Tu Duc, Khai Dinh, and Minh Mang. Backpackers Vietnam will have the detail information about these tombs in next posts about Hue.

Thien Mu Pagoda – a 7-tiered temple on the banks of the river is one of the most famous pagodas in Vietnam, and also know as the symbol of Hue City.  Along with admiring the pagoda, you’re also sure to see young monks in training here going about their duties and studies. Visit early in the morning to beat the crowds. 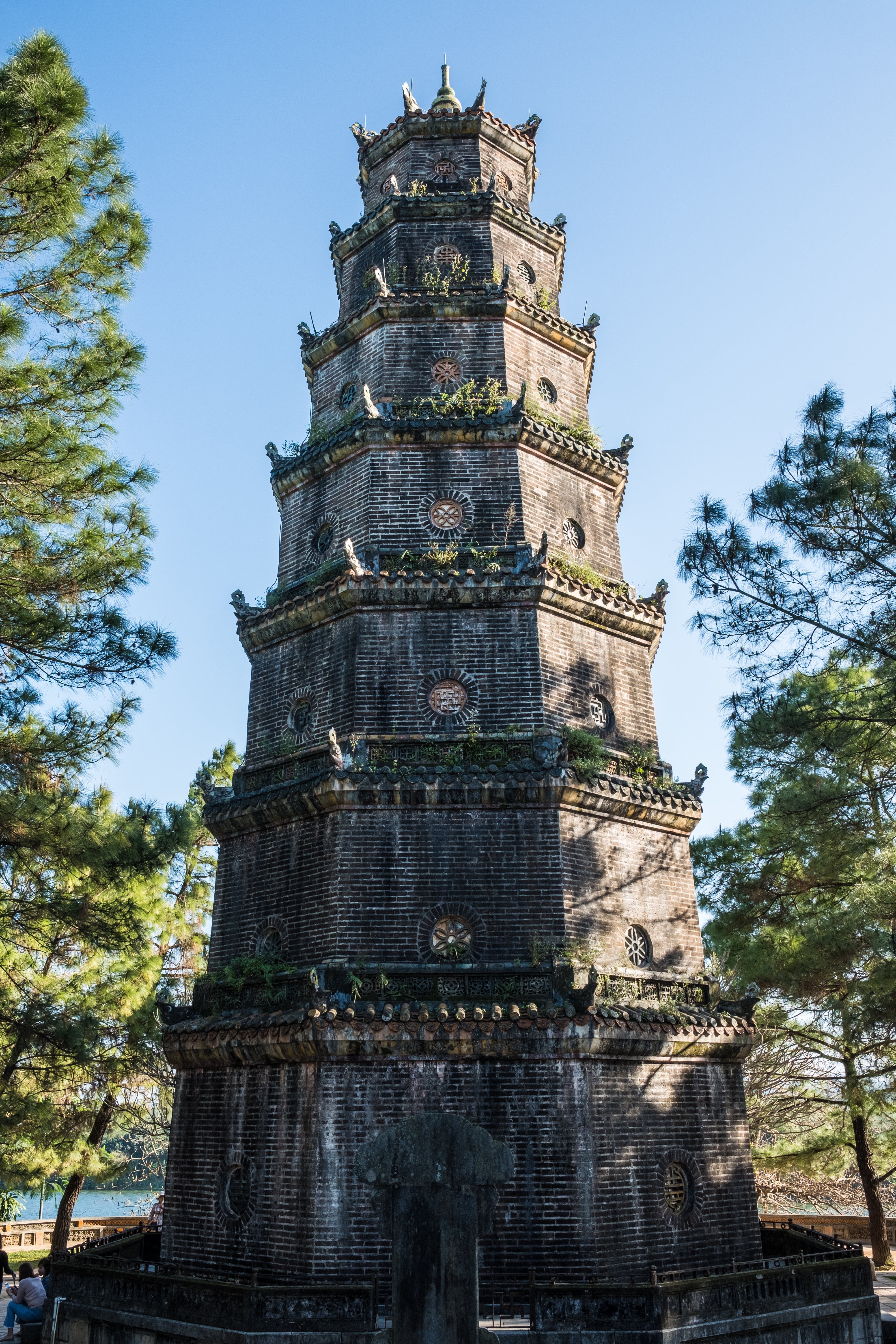 Dynastic Temple (The Mieu) was built in 1921 to worship King Gia Long. Up to now, 10 Kings are worshipped in The Mieu.

Tu Hieu Pagoda dated from 1843. This pagoda was also the home of eunuchs during the times of the Ancient Citadel in Hue and nowadays some 70 monks live here. When visiting, you can enjoy two towering temples and also listen to the monks chanting throughout the day as part of their religious rituals.

A visit to Hue would not be complete without a boat excursion on the Perfume River.This is a 80 kilometer-long river which is flows through many forests of aromatic plants before reaching Hue, bringing with it a pure and fresh aroma.

Boats can take backpackers to numerous sites of the capital. Especially, when the night comes, the surface of the river glistens under the moonlight, and the songs of the boat rowers can be heard breaking the silence.

It is possible to pick up many of the standard souvenirs in Vietnam in Hue City. Dong Ba Market is the City’s busiest trading Center.

You can also visit a few shops scattered around Pham Ngu Lao Street and the rest of the backpacker area that specialize in artwork and loacally made handicrafts such as Ta Gallery, Le Ba Dang Gallery..

Hue is really famous for there special local cuisine. Backpackers can find an abundance of street food on every corner, especially outside the bustling Dong Ba Market. You will easily find something that suit your palate: from standard backpackers meals like pancakes, cheeseburgers to Vietnamese unique dishes.

Here are some food recommendations of Vietnam Backpackers:

There are plenty of hotel options in Hue. Some worth checking out include:

You can fly to Hue from either Hanoi or Ho Chi Minh City to Phu Bai International Airport.

Hue is often said to be one of the nicest cities in Vietnam to cycle around.

Bicycle rentals are an inexpensive and easy way to get around town, and you could pass an afternoon exploring Hue’s riverside road on two wheels. So, go on a countryside cycling tour.

For active travelers, cycling along the Perfume River is a must. The route, which benefits from the cool river breezes, passes the ancient Thien Mu Pagoda, emerald rice paddies, and elaborate tombs. If you’re feeling adventurous, you can also make a stop at an abandoned water park. You will find far less traffic here than in other parts of the country and you can also cycle along the lush banks of the Perfume River and visit all the key attractions for which Hue is famous.

And if you rent a motorbike, remember not to go over 40km/h.

Check out more destinations of Hue in the gallery.